Before the meteorite changed everything about 65 million years ago, life had already made many paths in different ways and we are still discovering species from that moment (thinking that we do not know all the current ones, it is logical). The last one has been detected by Mexican researchers and, apparently, it is something like a “talkative” dinosaur.

No, Spielberg, you don’t have material here for a live-action ‘Jurassic Park’ a la ‘The Lion King’ (no, please). By “talkative” we mean the indications that this new species would be particularly talkative or talkative, as described by peleontologists. Something that is deduced by the bones found, very well preserved, and the anatomy that is intuited from them.

A species that would announce its arrival with fanfare

In the statement they explain that a group of paleontologists from the National Institute of Anthropology and History (INAH), the institution of the Ministry of Culture and the National Autonomous University of Mexico (UNAM) were able to recover and study a specimen of a herbivorous dinosaur that, Despite having died about 72 or 73 million years ago, it was quite well preserved (possibly because it was covered with sediment relatively quickly, thus forming a kind of natural sarcophagus). After studying it thoroughly, the conclusion is that they are about a new species: the Tlatolophus galorum.

If you are somewhat knowledgeable about the species that we usually see in books, toys and movies about dinosaurs, perhaps the name sounds a bit familiar to you, especially the ending of the genus (Tlatolophus). “Lophus” means crest in Latin, hence part of the name of the Parasaurolophus, mainstream herbivorous saury where they exist, and in this case a crest was also seen. 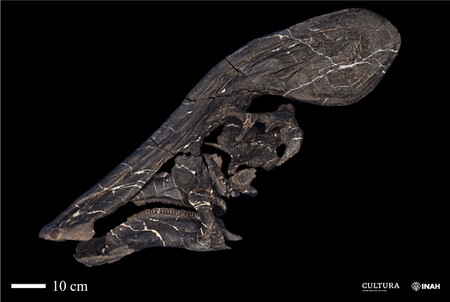 However, as explained, the nose and crest, although similar to those shown by parasaurolophins, did not correspond to the shapes and proportions of a Parasaurolophus. While that of a Parasaurolophus is tubular in shape, that of T. galorum has drop shape, although it has been described as a dinosaur from this Upper Cretaceous tribe.

In fact, they came to think that this was part of the pelvis, but eventually they saw that it was part of the skull. This crest (which measures 1.32 meters, eye there) was found with other cranial bones such as the palate, the jaws and even what makes up the cavity to house the brain (neurocranium). What according to paleontologists is approximately 80% of the skull.

In this way, comparing it to other dinosaurs in the group was a little easier, seeing that with respect to Velafrons coahuilensis (another hadrosaur found in the region, with a more compact crest and not tube-shaped like Parasaurolophus) there were differences in the crest and nose, placing it closer to the tribe of the Parasaurolophins. But as we said, it did not fit into one already known, so they concluded that it was a new genus of crested dinosaur.

Previous studies already attribute communicative functions to this ridge through the internal ducts and connections to the nose, describing it as a “integrated trumpet“. Ángel Alejandro Ramírez Velasco, a doctoral student at UNAM’s Institute of Geology, also explains that they know that they had ears capable of receiving low-frequency sounds, so” they must have been peaceful dinosaurs, but talkative. ” that they were of showy colors, as they have shown in the illustrations, due to the theories that support that they would emit loud sounds to scare off carnivores or for reproduction purposes.

It all started with a queue

Thus, the name of the new genre comes precisely from the allusion to this supposed chattering ability and the crest, as we said. The first part of Tlatolophus comes from the nahua tlahtolli voice (word), so literally its translation is “crest word”. The species, galorum, comes from a tribute to two actors: “ga” by the philanthropist Jesús Garza Arocha and “lorum” for the recognition of the support received by the López family, who collaborated with the team of paleontologists with lodging, food and other facilities. .

The team of paleontologists skirting the tail. Image: INAH

Regarding the discovery, Ramírez explains that in principle they did not expect to find remains of the upper part of the animal, and that it was a surprise to start to find bones like the scapula (shoulder blade) or the femur). It was started from the discovery of an articulated hadrosaur tail in General Cepeda, Coahuila (Mexico), prioritizing the rigorous extraction of the skeleton to avoid the erosion that it would continue to suffer from wind, rain and other agents.

The researchers take the opportunity to highlight the exceptional nature of the find (due to conservation conditions) and the importance of being notified as soon as possible if a possible fossil is found, so that it can be studied avoiding wear as much as possible ( and above all not to try to extract it, they clarify).

At the end of the day, it is not only that new species can be discovered, it is that we continue to know about the already well-known ones or about the conditions of the moment (or the relationships between the species). The contents of the stomach can be preserved, which gives clues about food and even its physiology, although it is also true that sometimes fossils can be found in a drawer.