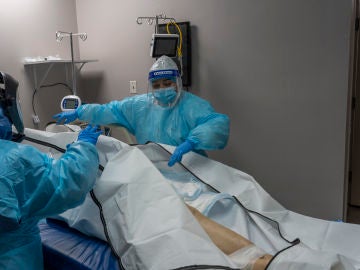 Leslie and Patricia McWaters They spent almost 50 years together before dying the same day from coronavirus, just a minute apart, in Michigan, United States. Patricia was 78 years old and her husband, Leslie, 75. She was a nurse and he was a truck driver and a Navy veteran; They are survived by their two daughters, three grandchildren and six great-grandchildren.

“It is beautiful, but tragic. Something like Romeo and Juliet“, laments his daughter, Joanna, in local media. “One would not have wanted to be without the other,” she adds sadly. After 47 years together, the coronavirus was a battle that the couple could not overcome.

Patricia McWaters, 78, spent more than three decades of her career working in the operating room of the Foote Allegiance Hospital in Jackson, Michigan, his hometown. Leslie McWaters, for his part, was also a native of Jackson and was a truck driver and veteran of the United States Navy Reserve.

“It is hard enough to lose a parent, but this was the worst. Our entire family is completely devastated,” laments her daughter. They are survived by their two daughters, three grandchildren and six great-grandchildren. Michigan, in the United States, has reported more than 378,000 cases and more than 9,400 deaths by coronavirus. The state has restricted indoor social gatherings and other group activities due to the increase in cases.