When we think of an aurora the first thing that comes to mind is probably an image of the greenish polar sky on our Earth. However, auroras don’t have to be unique to Earth, there are too on Jupiter for instance. New images and analysis from NASA allows us see how spectacular they can be.

Different spaceships and probes are orbiting some of the planets of the Solar System in order to observe and understand them better. One of those probes is Juno, which has been orbiting the largest planet in our Solar System for some time, Jupiter. Among your goals? Study the mysterious auroras that form at the gas giant’s poles.

Auroras, but on Jupiter

Recently NASA has shared new data about these auroras, which have been detected thanks to the Ultraviolet Spectrograph (UVS) on board Juno. A “weak” auroras but extremely large considering the size of Jupiter compared to Earth. 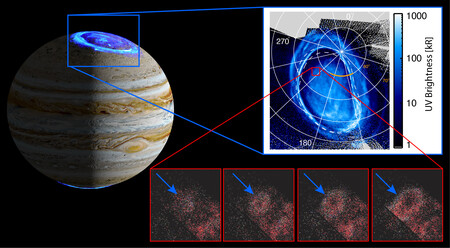 According to the analysis, auroras generated at Jupiter’s poles are estimated to expand at up to seven kilometers per second. For this they are unchaining a reaction in charged particles in the planet’s magnetosphere. Reason? It is something similar to what happens on Earth and it also seems to be happening at the poles of the planet like here.

This magnetosphere in some way or another is believed to be the cause of the auroras when in contact with the solar wind. This is similar to Earth, the difference is that Jupiter’s magnetosphere can be up to 20,000 times more powerful than Earth’s, deflecting solar wind at a distance of up to 6 million kilometers from the planet.

Be that as it may and despite the decades of observation that we have of Jupiter, It is not yet entirely clear how Jupiter’s auroras form. It is not entirely clear what role the solar wind plays in this case. We must also take into account the considerable rotation of Jupiter, with days of just 10 hours it is the fastest in the entire Solar System.

In summary, more research will be required to understand well how Jupiter’s auroras are formed and how they are related to those here on Earth. Fortunately we have Juno there for it, who has extended his mission until 2025 to study this and other phenomena on the largest planet in the Solar System.