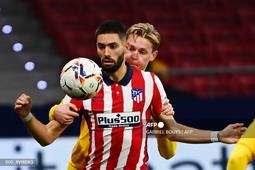 Atlético de Madrid beat Barcelona 1-0, a result that allows the rojiblancos to catch up with Real Sociedad in the leadership of LaLiga and that moves a Barça that is already 9 points away from the fight.

“I am very content with the effort of the team, they have understood how to position us, on defense, on offense, with very nice plays in the first half. The goal appeared and that generated a little more peace of mind, trying to find the second , which did not happen “, summarized Diego Simeone.

Atlético, the only undefeated team in the Spanish championship, won with a lone goal from Belgian Yannick Carrasco on the brink of halftime, taking advantage of a big mistake by Marc André Ter Stegen.

In a quick against Atlética, the German goalkeeper missed his exit 35 meters from his goal and Carrasco only had to push the ball into the net.

“Atlético’s goal is our mistake. In minute 47 (45 + 2), having the ball, with 0-0, we lose it and they score the goal. It should never have happened,” lamented coach Ronald Koeman.

“We had two very clear chances to draw. It’s little, I agree, but it’s always difficult to make chances against teams of this type,” he added.

The night was disastrous for Barcelona and not only because of the defeat, but because its central Gerard Piqué retired from the field crying, with a knee injury, and finished with 10 because Sergi Roberto was also injured when coach Ronald Koeman had already performed all the changes.

“Gerard Piqué has a sprain in his right knee. Pending more tests to know the exact extent of the injury,” Barcelona reported on Twitter, adding that Roberto is “a muscle injury in the rectus femoris of the right thigh.”

With this result, Atlético reaches 20 points, the same as Real Sociedad, which will visit Cádiz (6th) on Sunday, while Barça wanders through the middle zone, nine points behind the co-leaders.

The one who has not just started at Real Madrid either. Two weeks after losing in Valencia (4-1) and four days before receiving Inter, Zinedine Zidane’s team lost two points again on their visit to Villarreal, after drawing one goal.

Dominican-born forward Mariano Díaz, who was surprisingly a starter, opened the scoring for Real Madrid as soon as the game started, but the team coached by Zinedine Zidane was unplugging from the game as the minutes progressed and Villarreal ended up drawing with a penalty goal from Gerard Moreno (75).

With this tie, Real Madrid remains fourth in the provisional classification (with 17 points out of 27 possible), while Villarreal gets on the podium (3rd) with 19 points, one behind Real Sociedad and Atlético.

“Clearly, we lose two points. The draw is not enough. We deserved much more today for the game we played. It bothered me because of the efforts of the boys,” declared a Zidane after the game who had significant casualties for this game (Benzema, Ramos and Casemiro).

After the criticism received for the bad results of the team at the beginning of the season, Zidane assured the journalists: “I have the same illusion as the first day, don’t worry about it.”

This Saturday also, Sevilla (7th) relaunched their career with a 4-2 win on their home court against Celta (19th).