Any generational duel has its implicit morbidity. It is a test of where the veteran champion is and how far away the young hopeful is. Today’s Wednesday (not before 3:00 p.m.) means the first match in competition between the king of Spanish tennis, Rafael Nadal, and one of the heirs to his throne, when he leaves it, Carlos Alcaraz placeholder image.

“It is going to be a special match. They face the present, because Rafa is still the present and for many years, and the immediate future. I think Alcaraz is going to be a great player. It is already very good, although it still lacks that experience and is in the process of growing. It is a natural generational change ”, he pointed out in ATP Carlos Moyà, manager of the manacorí.

The Alcaraz coach is another former world No. 1, Juan Carlos Ferrero placeholder image. “For me it is a generational duel. I would not dare to speak of relief ”, the Valencian tells ATP, who insists on avoiding comparisons. “It is true that Carlos is the boy who comes from behind, not to replace, but to opt for great things and play great games. I think everything that is said about Carlos as Rafa’s replacement is not a good thing for him. It is an added pressure that is put there. It doesn’t do much good. I like to think that we have another player who has a lot of potential ”.

Rafa Nada trained together in preparation for the Australian Open 2021

Carlos Alcaraz turns 18 today facing his idol. “A dream come true,” he said after debuting at the Mutua Madrid Open defeating the French Adrian mannarino, left-handed like Nadal, by 6-4 and 6-0. He has a drive of those that dictate the law, his service goes to more and the head and the physique accompany him since he was a child. It is very, very good, although Rafa Nadal plays in a category reserved for a select few and with conditions and track records that make him unique. Unrepeatable.

On the way to his 35 years (he does them on June 3), Nadal passed his private exam at Godó, which he won for the twelfth time, going back from the match point to Stefanos Tsitsipas in the end. “Winning a tournament when you are not playing very well is very positive for the next,” confessed the Balearic, who went from less to more in Barcelona, ​​gradually dispelling the doubts originated in the defeat with Andrey Rublev in Monte Carlo.

He aspires to a sixth crown in this ATP Masters 1000 in Madrid, fifth on gravel. Dealing once again with the factor of the height of the city, which forces him to readjust his blows, to an extra effort. 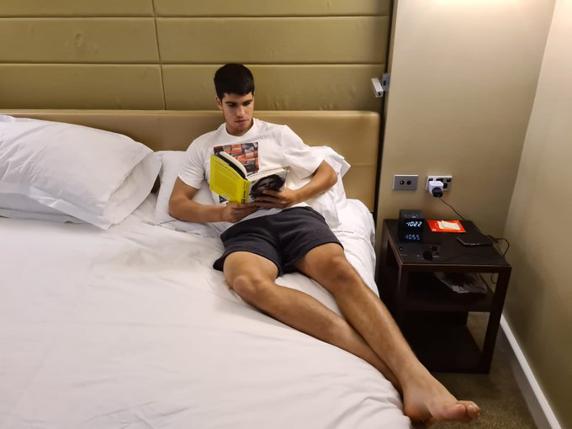 Carlos Alcaraz, confined to the Melbourne hotel before the Australian Open, reading a biography of Rafa Nadal

He knows Alcaraz well, who has been followed by the tennis universe for a long time. In addition, they both trained in Melbourne this season. It is your turn to take responsibility, something that is in your daily plan. It always costs him a little more to enter a tournament, but Nadal will want to show gallons to someone who is an advantageous disciple, who has followed every movement of the myth, with whom he shares similarities as an unwavering competitive character. Let’s see how Carlos deals with nerves, who made the semifinals on the clay of Marbella.