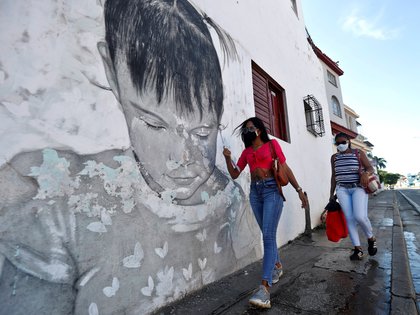 Last Friday, November 13, the Cuban government sentenced two young opposition artists. Didier Almagro, a 23-year-old rapper, was sentenced to three years in prison for protesting against the Cuban government over a power outage in August along with other members of the Julio Machado Academy collective and residents of the La Fogonera neighborhood. Didier he was arrested for public disorder. Friends and relatives have denounced during their detention that has been beaten and denied the right to speak to family members. Only after a public campaign are you allowed five phone minutes per week. After an accelerated trial, full of irregularities, the sentence was known. Didier is serving a sentence in the Santa Clara prison.

The same November 13, Denis Solís González, also a rapper, also young, was sentenced to eight months in prison in an expedited and secret trial, after being missing and incommunicado for 4 days. Denis had reacted verbally to the warrantless intrusion of police officers into his home. Since last week artists and academics who demand for their freedom have been detained on Thursday 12, Friday 13, Saturday 14, Sunday 15 and Monday 16. Denis is serving a sentence in the Valle Grande prison, reserved for political prisoners.

Why the escalation of violence? What is the Cuban government afraid of?

First of all, he fears his young. There is a generation, the third born under the revolutionary regime, who wants a different destiny for his country crossed by hunger and neglect of houses that collapse on the heads of its inhabitants. They want, and they say it clearly, no longer to live under a communist regime. Didier at the trial declared over and over again “down with communism”; Denis was final: Díaz Canel is nothing more than an “executioner of his people”. Their oppositional attitude makes them enemies of the state co-opted entirely by the single party.

Secondly, they fear art. Art is critical thinking, creativity, doubts about certainties, exploration and freedom. These young artists represent an emerging generation who discuss official art that has always been one of the legitimizing flags of the Cuban state. The discussion is generational and expected anywhere in the world. Only in Cuba and other autocracies does it irrevocably become a political and partisan discussion. For these young artists who seek to create their own language, arguing against established art is arguing against the institutional machinery with which the government silences dissent.

In third place, they fear the union. It has been a long time since Cuba has seen organized, cohesive civil society movements with this level of activism. Since last week the members of the San Isidro Movement, which groups artists, academics and journalists, have mobilized to first ask for Denis’ faith of life and then to demand his release. In shifts, they stand guard in front of the police station on Cuba and Chacón streets, are detained, released again and stand guard again. The movement has been effective in its campaign against decree 349 that criminalizes independent art. It has been successful in organizing the first opposition cultural biennial. It mobilizes resources, teaches languages ​​and keeps Cubans and the world informed of what the revolution implies for those who do not discuss it. All of them have been detained more than once, deprived of the possibility of traveling outside the country, watched, threatened and have been expelled from their jobs and their homes..

The Machado Academy also brings together young artists and activists who from the outskirts of Santiago de Cuba seek that their social, economic and cultural rights are respected. We talk about electricity, the possibility of peacefully demonstrating, organizing and meeting, singing, writing, painting.

They are young, they are talented artists and they are united. And the Cuban government fears them. It would help if the European Union, in its human rights dialogue with the Cuban government, demands a concrete commitment from it by inviting the UN special procedures to visit the country, in particular allowing the visits of the Rapporteurs on the promotion and protection of the right to freedom of opinion and expression; on the rights to freedom of peaceful assembly and of association; on cultural rights; on arbitrary detentions; and on the situation of human rights defenders.