UEFA held a press conference this Friday with the chief of its referees, the Italian Roberto Rosetti, in which he made an assessment of the first matches in this European Championship, up to the round of 16.

In short, in the first tournament of the highest European level with VAR technology, it has been concluded that there has been a “better attitude of the players on the field of play and towards the referees. There were fewer fouls and fewer yellow cards, as well as fewer red cards”, compared to this stage in past European Cups, since 2004.

This has meant that so far this tournament has been a few games with fewer fouls, and more effective playing time. Despite this, more penalties have been awarded, largely ‘thanks’ or ‘because of’ the “introduction of VAR,” according to Rosetti. Seven more than before the round of 16 at Euro 2016 in France.

“We have not instructed the referees to call fewer fouls. The reason for these numbers is due to the better behavior of the players.”Rosetti said. “Fingers crossed that the trend continues.”

Specifically, a total of 806 offenses for which the match had to be stopped, 22.4 on average per match, compared to 911 in 2016, at 25.3 per game. In game time, it has increased to 2 minutes and 21 seconds, despite the stoppages due to VAR and penalties, this year being 58 minutes and 51 seconds per game.

In all these games, the only mistake Rosetti points out is Celik’s hand in the opening match between Turkey and Italy, in an action that Makkelie would have needed the VAR call to review, by Kevin Blom. In that same match, Rosetti confirmed another error of Makkelie in that match, by signaling an offside on a corner kick that he should not have signaled. 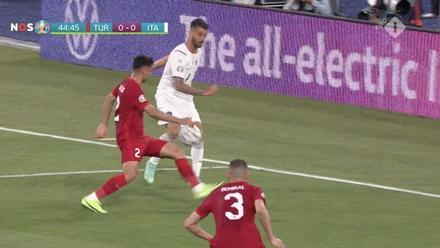 “Now there is more precision. Before the VAR project there were many clear faults in the areas that the referees omitted. And with the VAR it is easier to see them. We know very well the strength and also the limits of the project. We know that the VAR It is not an easy project and we know what happened in some countries for not using this technology well. It is still a young project that needs expert pilots. We need to find a balance on the intervention line because our goal is to keep football as it is now. We don’t want to have to study all the minimal or marginal contacts in the penalty area. Minimal interference for maximum benefit. Its use, only for clear and obvious errors“Rosetti added regarding the use of VAR in all European competitions.