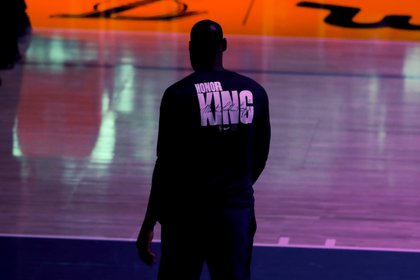 Los Angeles (USA), Feb 18 . .- The Brooklyn Nets confirmed today that they are a real threat this season by knocking down the Los Angeles Lakers (98-109) in a duel in style that was only tarnished for the important losses of Kevin Durant for the New Yorkers and of Anthony Davis and Dennis Schroder for the Angelenos.
All the attention of the NBA was focused today on this meeting between two teams that, although there is still an eternity, many anticipate as they could see their faces in the Finals.
But the absences of the injured Durant and Davis, two mainstays in their respective teams, somewhat decaffeinated the game and prevented more solid conclusions from being drawn.
In any case, the Nets raided the Staples Center in Los Angeles (USA) today with an artillery display from the perimeter (46% in triples with 18 of 39).
James Harden led this victory with 23 points, 11 assists and 5 rebounds, but was very well accompanied by Kyrie Irving (16 points, 7 rebounds and 5 assists) and by a fantastic Joe Harris (21 points, 6 of 7 on triples) and Timothe Luwawu-Cabarrot (15 points, 5 of 8 on 3-pointers).
On the part of the Lakers, LeBron James stood out, who today broke a new record by becoming the third player in NBA history to exceed 35,000 points scored (ahead of him only Kareem Abdul-Jabbar and Karl Malone remain).
The star of the purple and gold players got 32 points, 8 rebounds and 7 assists today, but could not make up for the mistake of his team from the triple (27%, 8 of 30 attempts).
Marc Gasol contributed 8 points (2 of 5 shooting), 3 rebounds, 3 assists, 2 steals and a block against 3 losses in 20 minutes.
The confrontation between the best attack in the league (Nets) and the best defense (Lakers) began with two very different bets: a low quintet in the case of Brooklyn and the ownership of a traditional center like Gasol for the current champions of the NBA.
That gave rise to some unnatural pairings, like Harden defending Gasol, but in the first minutes equality prevailed (16-12 in the middle of the opening quarter).
But after the short lead in the first quarter (24-31), the Nets’ arreón came in the second set from the hand of a splendid Harris who hit three triples in a row and put the visitors caressing the 20-point lead (41 -60 with three minutes to go).
At that moment James returned to the court to calm the waters and not to deliver the game before the break (53-64).
The Lakers were looking to re-engage the game with more faith than resources and with Kyle Kuzma taking a step forward (16 points and 10 rebounds at the end), but there was little they could do against a Nets who saw the rim the size of a pool.
The start of the last quarter (74-90) summed up precisely what was seen on the court.
The Lakers, frustrated and out of ideas throughout the night, missed four consecutive triples with four different shooters, while the Nets continued to enjoy a fabulous shooting (74-96 after two minutes).
With 5 minutes to go, Vogel retired James and gave up, although in the trash minutes the locals made up the score in a slightly deceptive way.
The Lakers (22-8) will face the Miami Heat on Saturday in a rematch of the past NBA Finals, while the Nets (19-12) will try to achieve their sixth consecutive victory on Sunday in another prestigious test against the Los Angeles Clippers.
David Villafranca: