More than eight out of ten Spaniards ask all public administrations to intensify efforts for scientific and technological research in the country. This is one of the main conclusions drawn from the 10th Survey of Social Perception of Science, a report carried out in 2020 by the Spanish Foundation for Science and Technology (FECYT) that analyzes how citizens see national R + D + i.

This survey was presented this Wednesday at the Alcobendas (Madrid) headquarters of the National Museum of Science and Technology and that has had the participation of the Minister of Science and Innovation, Pedro Duque; the professor of Sociology at the Autonomous University of Madrid (UAM) and scientific co-director of the Survey and the subsequent study, Josep Lobera; and the director of the Department of Scientific Culture and Innovation of FECYT, Rosa Capeáns. The editor-in-chief of the SINC agency, Pampa Garcia Molina, has moderated the meeting and debate on the results.

80% believe that regional governments should increase investment in research

Interest of men and women in science, medicine, health and pandemic according to age. / Survey of Social Perception of Science of FECYT

Spontaneously declared interest in science and technology continues to be greater among the mens (19%) than among women (10%). However, women show a greater interest in subjects with a very direct relationship with science and technology, such as medicine and health. 32% of women show a spontaneous interest in these questions, compared to 20% of men. Women have also been more interested in issues related to the pandemic (50%, compared to 43% of men), a central issue this year and closely linked to the development of scientific evidence.

32% of women show a spontaneous interest in medicine and health, compared to 20% of men

On this matter, Duque has pointed out that these figures are “surprising, very significant” and show areas where it is necessary to work to reduce this gender gap in perception: “It is necessary to work from the formative stage so that boys and girls are give the same ideas and perspectives, that they can do absolutely everything. “

In this regard, Lobera has specified that despite this disparity, women “also show a scientific interest” but that “it is named or interpreted differently.”

“It has been a very busy year in terms of trust. They tend to be oriented and do not change suddenly, but this year they have changed very strongly,” adds Lobera, indicating that in summer there were very polarized attitudes in Spain regarding the covid vaccine that changed dramatically with the start of the UK campaigns. “In July we saw 33% of people with reluctance, then it fell to 9% and now in May it is 4%,” he advanced, revealing data from the third round of the survey of social perception on scientific aspects of the covid- 19 (vaccines), which will be presented at the end of June.

Perception and social trust in vaccination and science

Asked by SINC as to whether these data reflect that Spanish citizens continue to trust science, despite the fact that the historical background reflects that scientific crises were accompanied by a worsening of social perception, the professor of Sociology at the UAM has pointed out that in Spain “that has not happened, but it has not left us the same either.”

“The pandemic has been a very strong shock and time is lacking for us to measure the attitudes of public opinion. People are still under a certain level of anxiety and stress, which causes us to react differently and affects our attitudes and behaviors, “he says.

I invite researchers to take advantage of our data, which shows how polarized positions have grown in the face of science as a solution to health problems with the pandemic

Josep Lobera, Professor of Sociology at the UAM

Regarding science, Lobera indicates that perception studies suggest that there is “a certain polarization”, where certain groups reaffirm their belief in research as a solution to health problems; while others, “in a climate of mistrust they cling to conspiracy theories, which can also be measured in this survey.”

“I invite researchers to take advantage of this data, where you can see how these positions have grown”, says the professor.

Image of Spanish science and technology

66% of the people surveyed consider that scientific and technological research in Spain lags behind the European Union average. To this is added that 62% of the population believes that the research profession is economically poorly paid, a significant increase compared to the last edition of the survey, in 2018, which placed this figure at 54%.

At the same time, 63% of the participants agree that Spanish researchers have little social recognition, despite the fact that it remains one of the most highly valued professions along with professors and doctors, above businessmen, judges and journalists. . 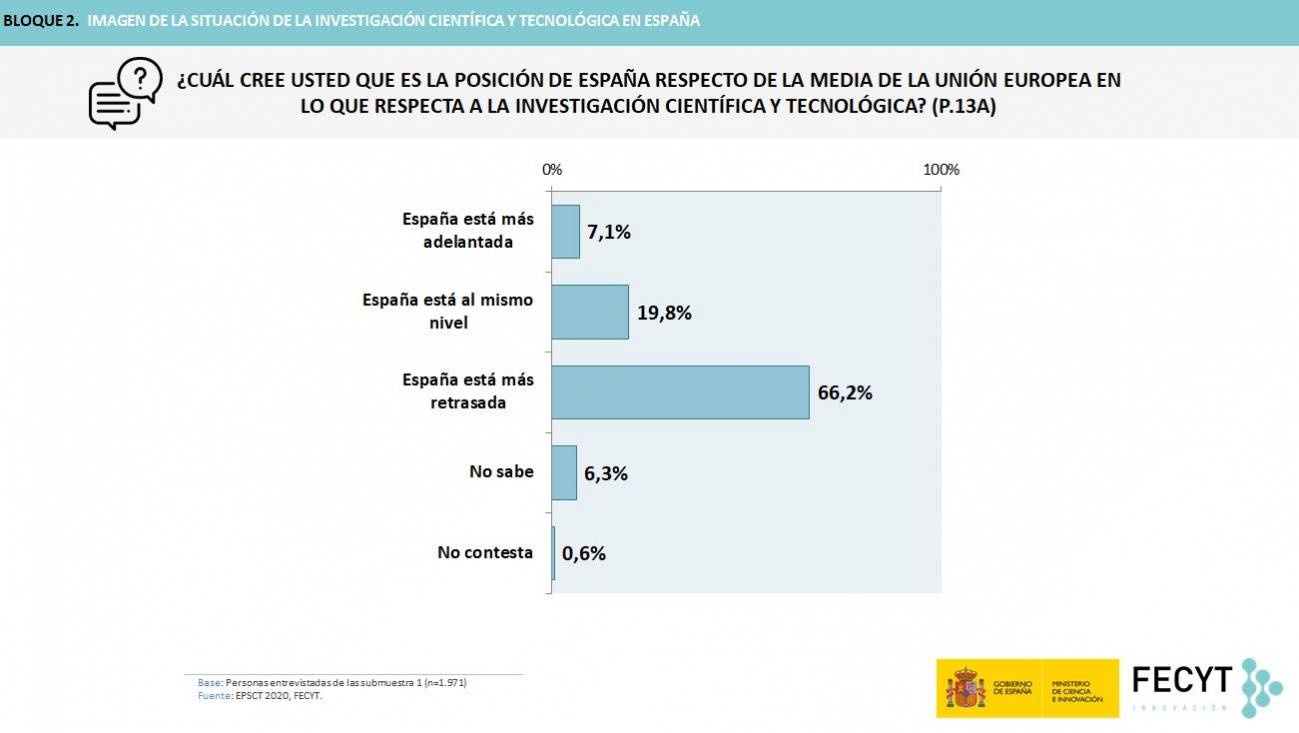 66.2% of the population believe that Spanish science lags behind the EU average. / Survey of Social Perception of Science of FECYT

Use of therapies without scientific evidence

The survey includes a specific module dedicated to investigating the social perception of some aspects of science applied to health. In a February press release, the results regarding attitudes towards vaccination were explained.

On the other hand, one in six Spaniards (17%) says they trust the beneficial effects of homeopathy, eight percentage points less than two years ago, while 11% in reiki (laying on of hands), five percentage points less than two years ago. This setback seems to be linked to information campaigns on these treatments but also to a decrease in general confidence, also in conventional treatments, such as vaccination.

On the other hand, about one in five Spaniards (19%) assures that their work could be replaced by a robot or artificial intelligence in 15 years. Thus, more than half of the population (53%) considers themselves capable of taking advantage of the opportunities of new technologies, although in an unequal proportion according to the level of studies: 70% among those who have university studies, but only 20% for those who have completed primary or lower education.

The survey has shown in recent editions that the internet has established itself as a fundamental means of information and scientific communication in Spain. In this edition, 61% of the population states that it is informed on the internet about science and technology, mainly through social networks and through generalist media in its digital version.

A vast majority of respondents (84%) believe that the climate crisis is a serious or very serious problem. Asked what the main cause of environmental problems may be, 67% point out that it is due to the level of consumption in society.

Regarding behaviors aimed at fighting anthropogenic climate change and mitigating its effects, 48% of the population says they have changed their shopping habits due to environmental or ethical issues, 27% share content on environmental issues on their social networks and 10% have participated in a demonstration.

Finally, 46% of those surveyed believe that technological innovations can help mitigate the climate crisis in a meaningful way.

For the X Survey of Social Perception of Science and Technology, 7,953 interviews have been carried out, distributed in each Autonomous Community. The population studied are people 15 years of age and older residing in Spain for 5 or more years.

The information collection work took place from July 14 to October 19, 2020 (no field work having been carried out in August). The sampling error for the entire sample is ± 1.12 percentage points for a confidence level of 95%.

The full report and all the data of this survey can be found on the FECYT website.