A few days ago it emerged, in the absence of an official announcement by both parties, that the highly anticipated match between Britons Anthony Joshua and Tyson Fury for world heavyweight titles, the August 14 in Saudi Arabia. Now, despite Fury’s silence, everything seems to go its way and, according to ESPN, there is already an agreement on the bag that the two fighters will receive, and it is one of the largest in history.

The powerful American media assumes that at last there is an agreement, and in view of the bag it announces, there has been a ‘war of jealousy’ and a fight for the hierarchy, because Joshua and Fury would charge exactly the same: 75 million dollars per head (about 62 million euros). A figure to which another five million are added to cover the emoluments of the rest of the boxers who will be part of the evening.

Anthony Joshua, right, regained his crowns in the rematch against then-plump Andy Ruiz

Apparently, the figures are endorsed by Saudi Arabia, scene of the fight, and Fury, until now the most reticent, would have already received guarantees, which has caused a change in his communication strategy: Until now, the WBC champion had said that until he had guarantees of the money he was going to enter, he would not lift a finger. Now, the one from Manchester, who has been preparing for several weeks in Miami, would have already received the OK, according to his last message on social networks: “I just got off the phone with Prince Khalid of Saudi Arabia”. 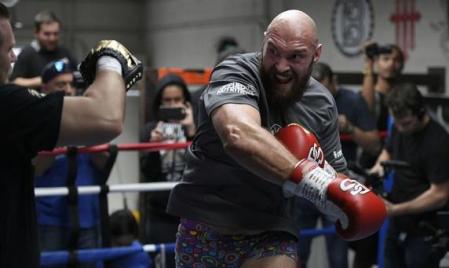 It is one of the largest bags in the history of professional boxing, only below the figures that were charged in their day Floyd Mayweather, Manny Pacquiao and Conor McGregor.

The Mayweather-Pacquiao is still the leader of the ranking: ‘Money’ made $ 275 million, and Pacquiao took $ 150 and defeat. Mayweather almost repeated his earnings years later: $ 250 million from fighting McGregor, which took $ 85 to his checking account. And they are also above the 75 ‘kilos’ of Joshua and Fury the 80 that Mayweather pocketed again against Canelo.