The Monitoring Program for Common Birds in Spring (Sacre) celebrates its 25th anniversary in Spain this season. SEO / BirdLife, the organization that promotes and coordinates this citizen science program, highlights the relevance of the initiative, which offers consolidated and scientifically validated data on the conservation status of more than 100 species of birds present in our country, the most common, providing more knowledge than any other wildlife monitoring system had provided until now.

The Sacre data is one of the best consolidated indicators of the health of our nature. And they are not good.

“The Sacre program is work on the ground, scientific rigor, knowledge generation, and collaboration and activism to defend the common good. Today is a day to give thanks: to the technicians who raise this program every year, to the researchers who generate science from their data and, above all, to the thousand of people who, each season, put on their boots and go out to value and vindicate the fundamental role of the citizen science in the conservation of nature on a global scale “, says the executive director of SEO / BirdLife, Asuncion Ruiz.

The information, the result of the effort of more than 1,000 volunteers that come out every spring to count birds, is a clear indicator of the impact of human beings on biodiversity: 37% of common birds, including such well-known species as the partridge wave swallow common, they are in an unfavorable conservation situation. This extreme offers signs of impacts such as climate change or unsustainable agricultural practices.

“The Sacre data is one of the best consolidated indicators of the health of our nature. And they are not good. That more than a third of the common birds are in an unfavorable situation is an alarm signal that should activate clear policies and actions to tackle the ecological crisis that we are suffering, and of which species as popular as the sparrow, the partridge or the Swift, Bird of the Year 2021, they have been alerting us for too long ”, adds the director.

A situation that could be improved

The results of the Sacre program provide information, based on the evolution of their populations, on which species have a favorable, stable or unfavorable conservation status. Although 44% of the species present positive population trend and another 19% reflect a situation stable in their populations, it does not mean that the situation is good.

Some of these species in decline are present in much of the territory such as the gray shrike, the common lark, the common quail or the long-tailed warbler

These data also indicate that 37% of the species are in a situation unfavorable, a high figure, especially if one takes into account that for 26 of them (62% of those with decline) their percentage of population decline since 1998 is over 30%. 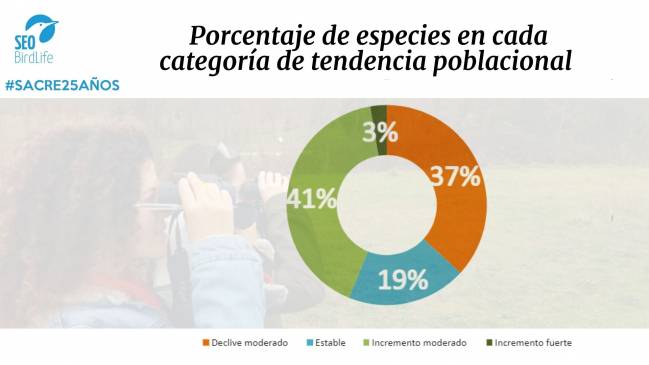 A priori, it is a tendency that forces public administrations to include them in threat categories at the state and regional level, and that implies the elaboration of your management plans corresponding to channel the improvement of their state of conservation.

With a methodology designed and validated by the scientific community, and applied internationally, the data from the Sacre program in Spain offer consolidated information that enables clear conservation policies to be activated by the administrations.

At the moment, the population trends of 114 common bird species with different abundances and distribution throughout the territory are considered well established. Some are very common, such as the common blackbird, the house sparrow and the vervet serine that have been recorded in more than 90% of the sample units considered, and others are more localized and / or present in fewer numbers: northern stone chick, European fly bird and black woodpecker, which have been so in less than 5%. 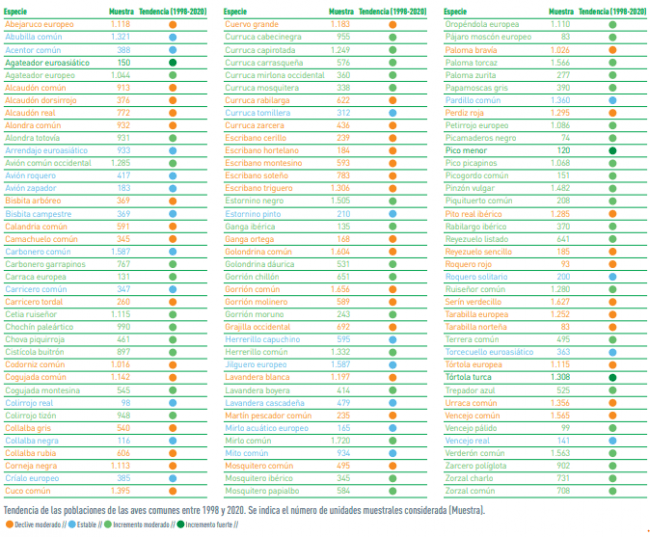 The five most representative common birds

Among all the species from which information can be obtained, SEO / BirdLife focuses on five of them, since they illustrate the situation of many others in the different habitats: the red rocker, the royal shrike, the red partridge, the common swift and the european robin.

The red rocker, with a 95.3% decline in its populations since 1998, could be critically endangered

The rocker Red, with a 95.3% decline in its populations since 1998, could enter into critical hazard based on the preliminary analysis of the evolution of its population. It is a species linked to the high mountains and the decrease in its numbers is one of the highest recorded among common birds. Climate change could be one of the causes of this decline, since it is in the high mountains where this phenomenon is causing changes in fauna and flora at a faster rate.

The shrike real It is a small-scale bird of prey, a great predator of grasshoppers, crickets and small vertebrates that are becoming increasingly scarce (it shows a decline of 62.6%) due to the enormous use of chemicals that limit the “weeds” of the agricultural operations but that also eliminate a large part of the animal life in them.

The partridge red has a large proportion of its population linked to agricultural environments and despite being granivorous, the development of its chickens and part of its biology depends to a large extent on insects, for which it suffers a great threat of disappearance of their livelihood, showing a trend of decline of 38.4% in their populations. In addition, it has other threats such as the use of fungicides, repopulation and hybridization with non-native species of partridges or hunting in places where their populations are severely depleted.

The swift common it spends its life in flight and only rests to incubate the eggs that will give rise to the new generations and to feed its chickens. It is a common species that, for centuries, has been linked to human constructions, where it finds holes in which to raise its chickens. It is becoming scarcer by problems linked to urban environments, such as pollution, the lack of places to breed, or the lack of food with a negative trend of 27.2%.

They are the thermometer of the health of our environment, but they also put numbers to the state of our quality of life

The robin European, on the contrary, like other species linked to forest environments (not all) it seems to have a positive evolution in their populations with an increase of 44.4%. The abandonment of agricultural and forestry activity in some areas, as well as past reforestations that are maturing, lead to the advancement or maturity of forests and shrub areas, which seems to explain why a large part of the more generalist species linked to these environments have positive trends and better state of conservation than the previous ones.

“It is surprising to see birds on the list of declines that are part of our collective imagination because they are birds that have always accompanied us. The sparrow is probably the best example, but there are other common birds that are raising the same alarm bells. They are the thermometer of the health of our environment, but they also put numbers on the state of our quality of life, ”says Asunción Ruiz. Not surprisingly, the Sacre is one of the indicators for Eurostat determine the quality of life of European citizens.

Much more than ordinary birds

Although the Sacre program is aimed at common birds, during field samplings information is recorded on all birds detected and records of more than 200 species are available (taking into account raptors, waders, ducks, etc.), offering additional information that, as in the case of the little bustard (a steppe bird that shows a marked decline and that testifies to the difficult time that birds linked to agricultural environments are going through ).

Many of them are not abundant (for example, the creeper) while others are (for example, buzzard), and in many of these cases so much information is becoming available that the evolution of their populations could also be evaluated.

A very important aspect of the Sacre program is the information it provides on the conservation status of different types of habitat through the population data of the birds associated with them. Most species depend mainly on certain environments and their trend can give an idea of ​​the existence or not of conservation problems in them.

The evolution in shrublands does not mean that all the species of birds found in these environments have a positive trend as well, although the majority do.

The evolution in shrubby means It is around stability and that of forest and urban environments in general on the rise. This does not mean that all the bird species found in these media have a positive trend as well, although most do.

In fact, in those most related to urban media, there are significant declines in such emblematic and representative birds as the house sparrow or the swift, while there is an important positive evolution of the Turkish turtle dove, the black starling or of new species in this environment such as the wood pigeon or the Argentine parrot. , although the latter is not included in the calculation of the trend in these media. 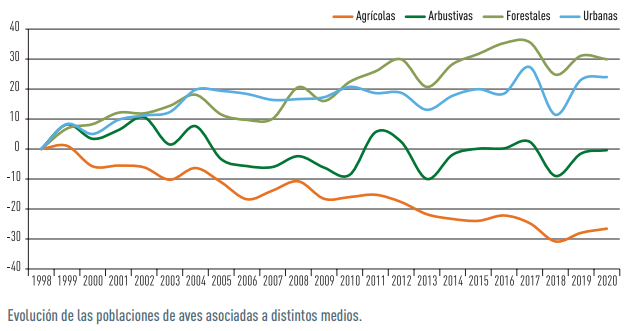 The case of birds linked to agrarian means It is, however, more forceful, especially of the species associated with herbaceous crops, for which the data show a constant decline throughout these years, with notable cases such as those of the aforementioned if they are and the Montagu’s harrier (declines confirmed with specific censuses), the quail, or the most discreet calenders.