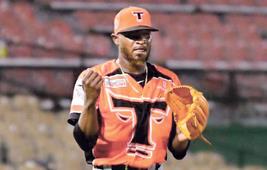 It was necessary to wait 66 tournaments so that in Dominican baseball a no-hitter game will be launched on an opening date, at least it was for the protagonists of this feat, the Toros del Este.

Domingo Germán led five pitchers who achieved the feat for the current monarchs of the Dominican ball, which in their first match beat Licey 2-0, precisely the team that won the crown in the last contest.

The last two no hitters in the annals of the ball were both thrown in Round Robin series, a fact that indicates that 21 years ago the last one in the Regular Series had been thrown, on November 22, 1999 when Miguel Batista (8.0) was He combined with Luis Andújar (1.0), throwing for the then Pollos del Cibao and leaving the Aguilas without uncool, a club that they blanked 1-0 at the Cibao stadium. Like all difficult feats, the history of no-hitters in the Dominican Republic is very limited, Monday is only the ninth in the annals.

The first one had as its protagonist the greatest pitcher in Dominican ball, Guayubín Olivo, who owns the records of victories, 86 and 742 strikeouts, produced his feat on Saturday, May 29, 1954 at the La Normal stadium by beating Licey 3 -0 to the Chosen One.