On Monday we got behind the wheel of the Mercedes C-Class 2021, whose internal code is W206 for the most “geeks” of the internal numbering of Mercedes. The sixth generation of the Mercedes access saloon is the direct heir to the “baby Benz”, the iconic Mercedes 190s of the eighties. Among its novelties is a interior redesign That puts it on the crest of the wave of the segment, especially when it comes to technology and infotainment. Another novelty is its complete electrification, and its launch with four-cylinder engines only.

From the outside, of course, it is not a revolutionary car. It grows in 65 mm until it reaches 4.75 meters, but its proportions and general aesthetics do not differentiate it too much from its predecessor. Nor do they differentiate it too much from the Mercedes E-Class, with whom it perhaps shares too many aesthetic features, especially at the level of headlights. It remains a traditional and elegant car, and even in its proven AMG Line version it is a much more “friendly” looking car than its direct rivals, the Audi A4 and BMW 3 Series.

If on the outside we are not surprised, on the inside the Mercedes C-Class is a revolution, incorporating almost directly the interior of the latest generation Mercedes S-Class. Thanks to this, its dashboard is dominated by a 12.3 “digital instrumentation and an 11.9” portrait-oriented center display. It feels much more avant-garde and futuristic than its direct rivals, as well as enjoying a cleaner design. Nothing to complain about its MBUX 2.0 infotainment system, one of the most advanced and refined on the market today.

Its voice control works great and helps to flatten the system’s learning curve, which is also considerable – as it is packed with so many features. The technology in the C-Class can be overwhelming, causing us to ignore other details of the driving position. Details, such as its perceived quality. Although the apparent quality seems excellent and there are no cracks at a dynamic level, by touching the materials we discover a total absence of soft plastics in the passenger compartment. 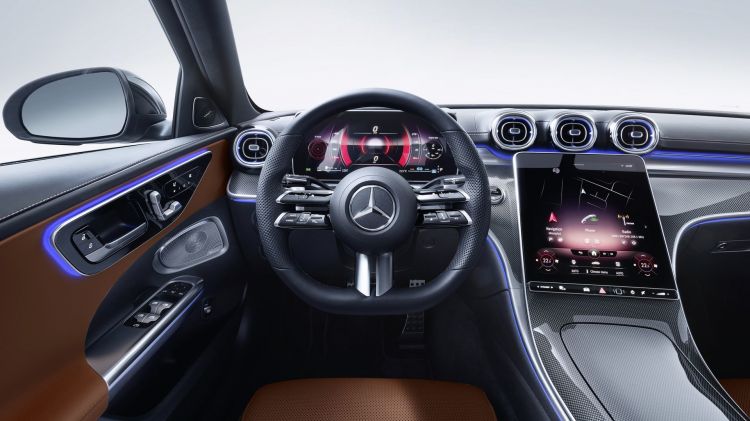 Piano black is present on the steering wheel controls, which combine haptic and tactile functions. In my opinion, they can be improved.

The dashboard and doors are covered in leather and imitation leather, and the dashboard itself may have trim that is not piano black plastic, but the plastic on the sides of the center console or the lower part of the dashboard is always hard. It is very well adjusted, but the cost savings in this type of detail are evident. At the level of ergonomics and space, the Mercedes C-Class improves slightly in dimensions, but its rear seats are still somewhat narrow at the transverse level and in headroom.

All about the new Mercedes C-Class 2021: a Mercedes S-Class in scale (+ video)

The trunk cubes exactly the same (455 liters) as in its predecessor, but maintains a relatively narrow and irregular loading mouth. In habitability, cargo space and qualities, I fear that the C-Class is a step below its rivals. 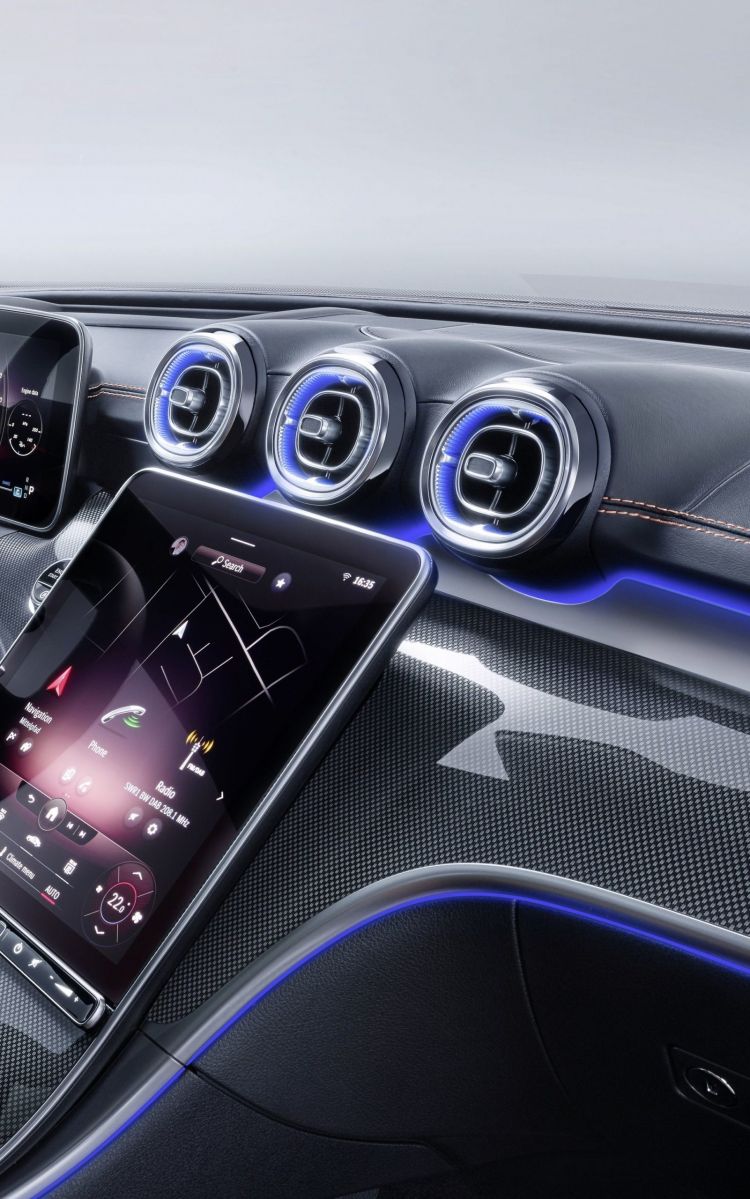 At the wheel of the new Mercedes C-Class

One of the great novelties of the Mercedes C-Class is that your engine range will never have more than four cylinders, nor in its conventional, plug-in versions or in its future high-flying AMG version. Another novelty is that its entire range of engines will be electrified, with microhybridization in all its diesel and gasoline mechanics. All conventional mechanics are associated with an automatic 9G-Tronic torque converter and integrate the 48-volt micro-hybrid system electric motor into the flywheel.

The tested version is a C 220 d, with a 200 hp diesel engine, 440 Nm of torque and an approved consumption of 5.0 l / 100 km. It is great news that some brands continue to have diesel engines in their ranges, especially in a traditional cut car. This engine stands out for its smooth operation. Although it does not have a wild thrust or a particularly nice sound, its actual consumption is very careful and it was impossible for it to consume more than 6 l / 100 km during our contact test – no regard for efficiency. 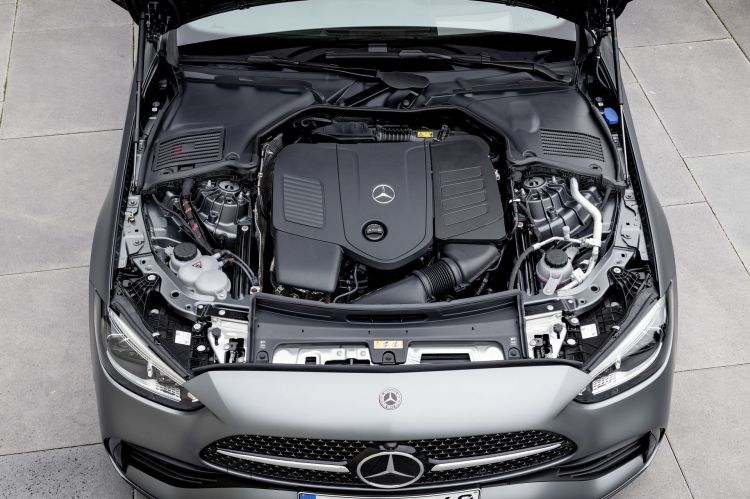 The 9G-Tronic gearbox is especially fast and the micro-hybrid system performs flawlessly: the start-up of the motor is fast and imperceptible, as well as free from vibrations or noise. The engine is capable of being completely disconnected (sailing) in certain circumstances, such as when we release the accelerator at a sustained speed and we have the Eco driving mode activated. The behavior of the car continues to veer towards the comfortable spectrum, even if we take the Sport driving mode.

Although less dynamic than a BMW 3 Series, it has notably gained agility and response.

It accuses certain inertia and balance, and the direction does not tell us anything. This should be quite solved in the AMG plug-in versions, which will exceed 500 HP of power. However, the Mercedes C-Class has a comfortable and road character, something in itself, very positive. In a world where it seems that sportsmanship is optimal, vehicles that are firmly committed to comfort are also necessary.

Among the innovations in active safety of the Mercedes C-Class is a airbag between the front seats and the Pre-Safe Impulse Side system, which rapidly inflates the side of the seat to move our body away from the door, if it detects an imminent side impact. Another really interesting assistance are the LED matrix headlights Digital Light. Each lighthouse has a resolution of 1.3 million pixels and does not remain a simple adaptive lighting, it can project warnings, shapes and signs on the asphalt, both for us and for other road users. It is still pending administrative processing. 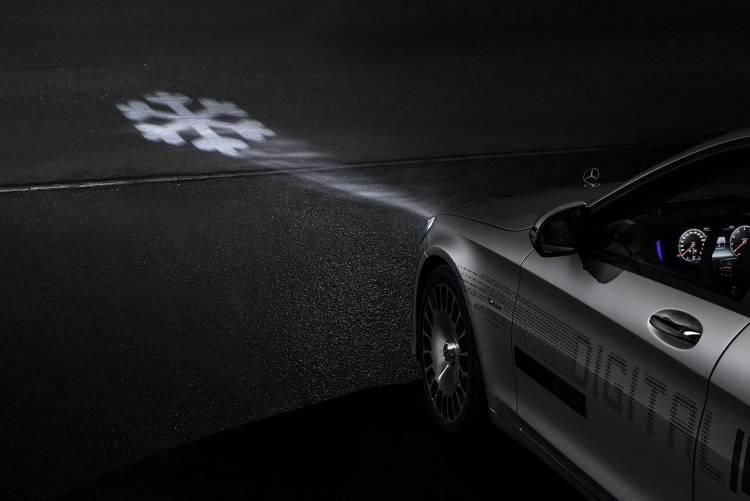 The Distronic Plus system is capable of operating at speeds of up to 210 km / h.

The Mercedes C-Class 2021 is already on sale in the brand’s dealer network. Their prices start at 45,400 euros for a 170 hp C 180 version, with a gasoline engine and four-door body. The surcharge of the family versions with respect to the saloons is around 1,600 euros, and for the first time in their history, they are launched at the same time as the saloons. Mercedes estimates that up to 40% of the sales of the Mercedes C-Class could correspond to the Estate, especially in European markets.