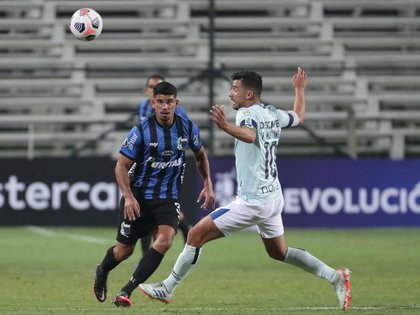 Montevideo, Feb 23 . .- With goals from Agustín Dávila and Martín Correa, Liverpool beat the Ecuadorian Catholic University 2-1 on Tuesday in the first leg of the first phase of the Copa Libertadores.
A spectacular free kick shot and a remarkable left-handed definition at the end of the game allowed him to overcome the Uruguayan team led by Marcelo Méndez, who will face the second leg with a favorable result.
In the first half, the eleventh visitor dominated with good ball handling in the center of the field, speed on the wings and effectiveness in attack.
At 13 minutes and after a blow to the knee, full-back Jonnathan Mina had to be replaced by Gustavo Cortez, who became one of the team’s figures along with Juan Manuel Tévez and José Carabalí.
The first clear option on the hot Montevideo night was for the Ecuadorians when Uruguayan defender Christian Almeida overcame the resistance of his goalkeeper with a header and the stick drowned out the first goal cry.
Liverpool responded with a powerful shot from Hernán Figueredo, who managed the strings of the local team from the center of the field.
Around 30 minutes, a full-speed climb by Cortez and a short clearance by goalkeeper Lentinelly in front of a shot by Lisandro Alzugaray found Tevez well stopped, who pushed the ball unopposed to score the first goal of the game in favor of the Catholic University.
Right away, Liverpool sought the equalizer with a shot by Agustín Dávila and with another by Agustín Ocampo, however, the poor aim and the effectiveness of goalkeeper Hernán Galíndez made the initial 45 minutes end with 0-1.
In the first moments of the second stage, Ocampo met the visiting goalkeeper again, while Lentinelly drowned out Walter Chalá in a heads-up.
Dumped on the attack, Liverpool began to approach the rival goal with more and more danger and at 67 minutes he won his prize after Agustín Dávila pierced the net with a spectacular free kick that left Galíndez without options.
The visitors opted for the counterattack and although they failed several times in the final pass, they also complicated the home defense.
About the end, the Ecuadorian goal drowned out Juan Ignacio Ramírez and everything indicated that the match was going to end tied, but Martín Correa had another plan and made it known after 92 minutes.
A powerful low shot from the number 20, who moments ago had replaced Dávila, got close to the post and sealed the comeback for the leader of the Uruguayan Clausura Tournament that will play in Ecuador on March 2.
– Data sheet:
2. Liverpool: Sebastián Lentinelly; Federico Pereira, Gonzalo Pérez, Christian Almeida, Camilo Cándido; Gastón Pérez (m.69, Alan Medina), Hernán Figueredo (m.75, Martín Fernández), Fabricio Díaz; Agustín Dávila (m.83, Martín Correa), Ignacio Ramírez and Agustín Ocampo (m.69, Gonzalo Bueno).
Coach: Marcelo Méndez.
1. Catholic University: Hernán Galíndez; Andrés López, Guillermo de los Santos, Yúber Mosquera, Jonnathan Mina (d.13, Gustavo Cortez); José Carabalí, Kevin Minda; Facundo Martínez (m.80, Edder Farias), Lisandro Alzugaray (m.84, Davinson Jama), Walter Chalá and Juan Manuel Tévez (m.80, Diego Armas).
Coach: Santiago Escobar.
Goals: 0-1, m.27: Juan Manuel Tevez. 1-1, m.68: Agustín Dávila. 2-1, m.92: Martín Correa.
Referee: The Argentine Nicolás Lamolina. He admonished Mina Anangonó (substitute at Universidad Católica), Mosquera, Martínez, Alzugaray and Almeida.
Incidents: Encounter corresponding to the first phase of the Copa Libertadores held at the Alfredo Víctor Viera stadium, in Montevideo.