Much of what we know about the ancients ocean ecosystems and the prehistoric species that inhabited them comes from the records of rocks and fossils that were stored in the sea ​​bottom. However, their study is generally limited to shallow water reservoirs, which provide a limited insight into history.

A team of researchers affirms, in two studies published in the journal Science, that sharks they almost went extinct ago 19 million years. However, the causes are unknown.

“It is a great mystery right now. We don’t really know much about this time interval. I think once we take a closer look and with finer temporal resolution, we will probably find why. Right now it is impossible to elucidate ”, he tells SINC Elizabeth sibert, which co-leads one of the research works from Yale University.

The consequences of this extinction are seen today, since it supposed that 90% of the species disappeared and have not recovered from that

According to the scientists, the sharks never recovered from this situation, because the data suggests that their current diversity represents only a small fraction of what they were in the past.

“The consequences of this extinction are seen today as it assumed that 90% of the species will disappear and they haven’t recovered from that. Today’s ocean was shaped by this extinction. If we look at what we are currently doing to the planet, further reducing populations, as well as other large marine predators (whales, tuna or swordfish) that disappear by human action, as well as by rapid climate change, it is probable that the ecosystem of the ocean could change dramatically again ”, explains the researcher.

In this first study, scientists collected microfossil data in deep sea sediments. In this way they were able to offer a fresh new vision of the changes in abundance and diversity from one of the ocean’s biggest predators.

“The deeper, the older the sample. What we saw was that until 19 million years ago there were many and diverse shark scales in the sediments. After and until today, these scales of shark and they are not very diverse ”, assures the expert.

The deeper, the older the sample. What we saw was that until 19 million years ago there were many and diverse shark scales in the sediments.

From the microfossils present in the sediment cores, called ichthyoliths (scales and teeth shed by sharks and other bony fish that accumulate naturally on the seafloor), reconstructed the record of diversity and abundance of sharks, which covers almost the last 40 million years.

According to the results, the extinction was almost total during the Early Miocene. Its abundance decreased by more than 90% and its morphological diversity by more than 70%. 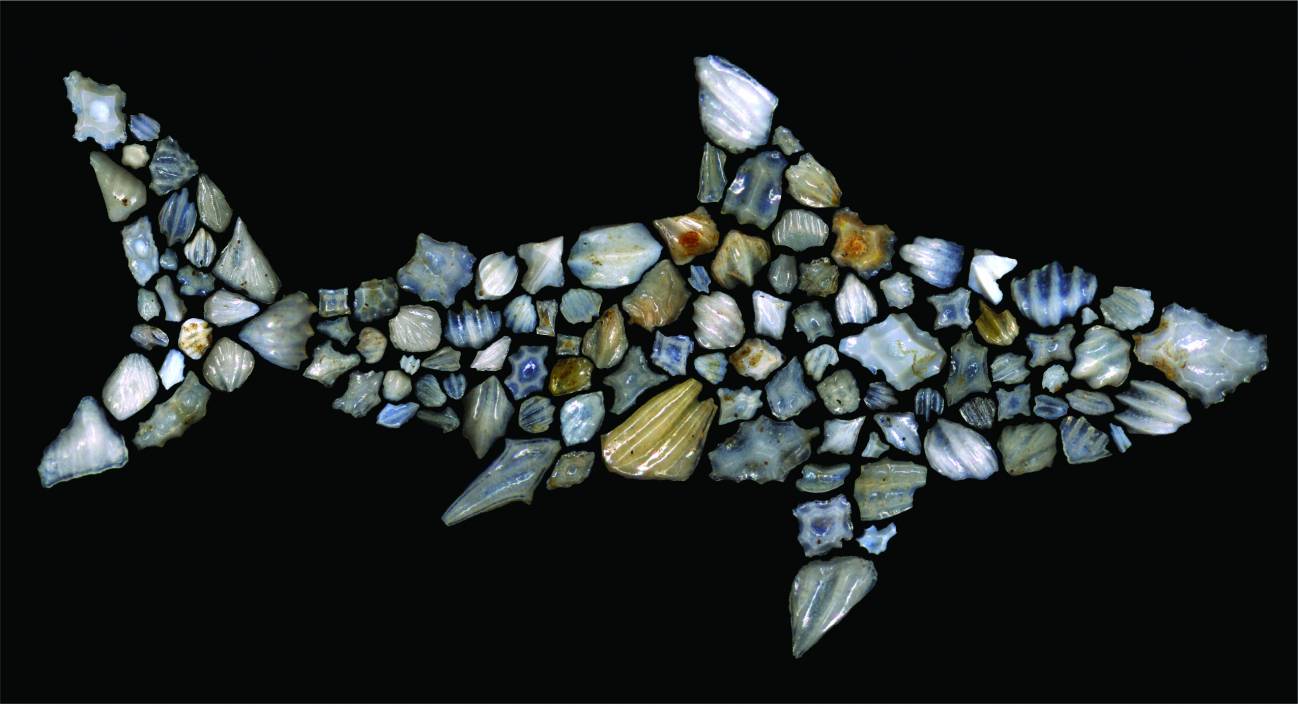 Silhouette of a shark composed of the fossil shark dermal denticles described in this study. Its morphology varies considerably between different species of sharks. / Leah D. Rubin

Carolina Pepper from the University of Zurich (Switzerland) and Nicholas pyenson from the Burke Museum of Natural History in Seattle (USA) lead a second perspective article on this extinction episode.

It talks about the parallels between this early Miocene event and the declines caused by human pressure today, which, according to the authors, are strikingly similar.

“Despite recent improvements in conservation actions, few countries impose targeted restrictions on oceanic sharks. The ecological fate of what remains now is in our hands,” emphasize Pimiento and Pyenson.

A puzzling event with no current explanation

The abrupt extinction of sharks occurred independently of any known global climate event and between 2 and 5 million years before the diversification of large predators. This implies that 19 million years ago was a period of rapid and transformative change for pelagic ecosystems, for which the causes are unknown.

“The only thing we know for sure is that these sharks lived in the open ocean, away from land, so they don’t have a good body fossil record. For this reason we do not know if they were large or small species, or what they ate. But we hope that as we analyze more remains we can learn more about ancient sharks, ”adds Sibert.

This event altered the ecology of the predators and subsequently laid the foundations for the great lineages of migratory sharks that currently dominate the oceans.

One lesson we can learn from mass extinctions is that not everything survives, but those that do are able to build a new life afterward.

“One lesson we can learn from mass extinctions is that not everything survives, but those that do are able to build a new life afterward. New organisms evolved and settled in today’s ocean. The survivors they are important, because they represent the next phase of evolution and a new state of the ecosystem ”, argues the scientist.

Right now the team only has data on sharks, but they are working on collecting data from other species. “I think that in the coming years we will know much more about whether this was just an event that impacted these species, or whether it also involved others,” concludes Sibert.