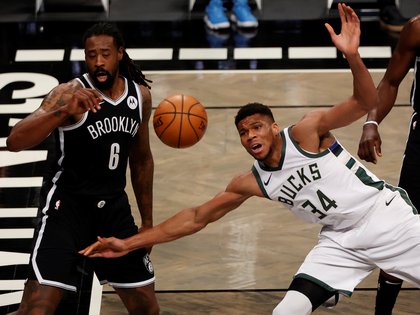 New York, Jan 18 . .- The NBA world once again set its sights on the Barclays Center, where this Monday the Brooklyn Nets, with their new star guard James Harden and forward Kevin Durant overcame with a triumph of 125-123 to the Milwaukee Bucks of Greek power forward Giannis Antetokounmpo.
Durant tripled the lead with 36 seconds left, and Harden had 34 points and 12 assists to once again be the perfect manager in the offensive game for the Nets (9-7), who won the fourth consecutive game.
The star forward of the Nets finished with 30 points, nine rebounds and six assists that allowed the Nets to confirm that they have already placed themselves in the group of teams to beat not only in the Eastern Conference but also in the league, as is the case with the Bucks.
Hence the game between two of the best teams had a tense and suspenseful ending that was not defined until forward Khris Middleton missed the 3-point attempt from the corner with the last shot to the basket.
Antetokounmpo also shone as a star and leader of the Bucks with a double-double of 34 points, 12 rebounds and seven assists, but they were not enough to avoid the defeat that cut their streak of four consecutive wins.
Middleton asserted his status as the team’s second leading scorer by scoring 25 points and point guard Jrue Holiday had another 22 points and six assists to lead the Bucks attack (9-5).
Harden scored 11 points at halftime after his 32-point debut with the Nets, when he added 14 assists and 12 rebounds, which gave him his first all-time franchise triple-double because no player had ever done it in Game 1 before. who played for them.
But as usual in Harden’s game of contrasts, the star guard regained his best wrist touch and contributed to the biggest play of the game, even when he missed.
He swooped in to grab the rebound off his own triple that missed when the Nets trailed by two and passed the ball to Durant, who did hit the gold triple.
“They are the plays that define what we can and must do on the field to win,” Durant said. “The fighting spirit of James (Harden) was the one that made the difference in our game again in the decisive moments.”
Before the game, Durant learned that he had been voted Eastern Conference Player of the Week after averaging 34 points; 5.3 rebounds and 8.0 assists in the week 3-0 for Brooklyn.
He also posted 61% from the field and 60% from 3-pointers in what was his first Eastern Conference award after receiving it 26 times in the Western Conference when he played for the Oklahoma City Thunder and Golden State Warriors.
Durant could have secured the win, but fumbled on his last possession after Middleton missed a 3-point attempt.
The recovery of the ball by Cuban-American center Brook Lopez, a former Nets player, who finished with 15 points, allowed the Bucks to have the last option to get the victory with 5.5 seconds left.
But it was not the night of Middleton’s decisive baskets that he failed again the second consecutive triple attempt and with 1.1 seconds to go Harden took the rebound again to be for the second consecutive night the star and the symbol of the Nets victory.
A victory that the new Nets achieved again without the help of star point guard Kyrie Irving, who missed the seventh consecutive game for “personal reasons”, as the team has reported since its first loss on January 7, without They have been more explicit about it.
Nets rookie coach Steve Nash announced that Irving could return with the team starting Wednesday when they are on the road in Cleveland to face the Cavaliers.
Both teams will play this week against last season’s NBA finalists. The Bucks host the champions Los Angeles Lakers on Thursday, two nights before the Nets open a two-game home series against the Miami Heat.