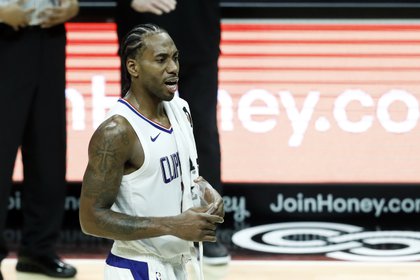 Los Angeles (USA), Jan 23 . .- The combination of forward Kawhi Leonard and Paul George along with Congolese-Spanish center Serge Ibaka was the perfect formula for the Los Angeles Clippers to defeat 120-106 the Oklahoma City Thunder and achieved their sixth consecutive victory.
Leonard finished as the leading scorer with 31 points, despite missing six of seven 3-point attempts; George reached 29 and Ibaka contributed a double-double of 17 points and 11 rebounds.
The victory allowed the Clippers (12-4) to once again share the leadership of the Pacific Division and the Western Conference with their neighbors the Los Angeles Lakers, who had a bye.
Ibaka, who has more and more prominence and presence as a key player in the Clippers’ game scheme, played 28 minutes and finished as the most effective player in the Clippers attack.
The Spanish international scored 7 of 8 from the field, including a triple on two attempts, and was 2-2 from the personnel line.
Ibaka shared the limelight under both baskets with seven defensive rebounds and four offensive rebounds against his former Thunder team, in addition to giving an assist.
Canadian guard Shai Gilgeous-Alexander was the Thunder’s top performer with 30 points and eight assists against his former team.
His compatriot, guard-forward Luguetz Dort scored 19 goals, which also could not prevent the defeat of the Oklahoma City team.
The Thunder were at a disadvantage for most of the game, ending up suffering their fourth loss in the last five games.
The Oklahoma City team made just 14 of 42 3-pointers and went to the free throw line only 13 times.
The Clippers took control in the first half, scoring 36 points in the opening quarter and 34 in the second, thanks to making 63% of their shots good.