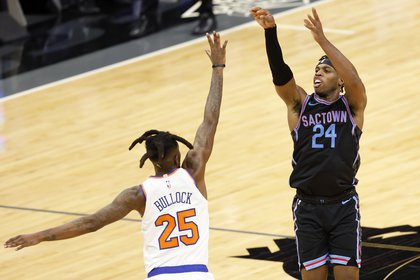 Orlando (USA), Jan 27 . .- Bahamian guard Buddy Hield scored 29 points, his best individual record so far this season, including seven triples, and the Sacramento Kings surprised away 107-121 to the Orlando Magic.
Sacramento was playing for the first time since Friday after two games were postponed due to the NBA’s Covid-19 health and safety protocols it applied to the Memphis Grizzlies.
Sacramento made 49 percent of his field goals, with 14 of 33 3-pointers.
Forward Harrison Barnes scored 21 points and power forward Richaun Holmes added a double-double of 20 points and 12 rebounds – third of the season – which left him as the Kings’ best player under the hoops.
Orlado’s team had its best scorer in the Montenegrin Swiss center Nikola Vucevic, who reached 26 points and nine rebounds, which did not prevent the third defeat in the last four games played.
French forward Evan Fournier contributed another 25 points and reserve guard Terrence Ross reached 16 as the third highest scorer for the Magic (8-11), who lost the fifth game at their Amway Center field (4-5), where an attendance of 3,216 fans was recorded, 17 percent of the entire field capacity, which is 18,500 people.